Posted on October 5, 2010 by findmeahomespain

Twice during the football season Andrew Brown the manager of Currencies Direct phones me without fail. It is always a few days before our respective teams do battle together on the playing field and last week was no exception as Liverpool FC got ready to travel to Old Trafford to play their biggest rivals Manchester Utd. Talking before the game means that neither of us will call after the match to gloat. By the time this is printed the match will be over and one of us will have been elated the other deflated.

With many couples moving each year to Spain to spend their retirements in the sun it is unfortunately possible that one or other will either get ill as they get older or perhaps sadly pass away. Often then there is the decision to return to the UK and the former home in Spain is put for on the market to sell.
‘This is a strange subject’ some may think to write about but the fact is that working in property sales for over four years here in Almeria I am still disgusted by the way some clients or ‘ambulance chasers’ try and then buy these properties at far less than market value. The poor surviving spouse normally relies on this money to support themselves on an expensive return to the UK. So if anyone out there is in this unfortunate position then I have full sympathy for you.
If anyone does make a ridiculous offer then please find the strength to tell them to ‘Go Away’ in very rude words.

I have had clients in the past that have openly talked to me about looking to take advantage of someone else’s misfortune. One chap even told me he was hoping to find a widow so desperate to sell her home she would accept a knockdown offer from him. Clients like that are quickly discarded by Findmeahome; let them try their disgusting tricks via another more unscrupulous agent. The property game over here is fraught with perils as many of us can testify to so at least by us showing these ‘sharks’ the open door it’s a step in the right direction.

As I write the first of the heavy autumn rains have been falling for the last few hours. My mother gawd bless her visits twice a year normally in May and September and in four years she has yet to have a visit and not need a raincoat. Anyone with important plans for these two months next year should drop me a line and I can safely guarantee that as long as you avoid the days she has booked for her trip it will be sunny and glorious.

Sitting enjoying the sun and the glorious sea view in BBME on Mojacar playa and enjoying some good food and chilled music the other day it was good to see everywhere looking a lot busier than the same time last year. This very newspaper reported occupancy levels up during August so let’s hope the trend continues as the Almeria Costa is a great place for a holiday whether someone is travelling from abroad or already living here in Spain.
It did make us laugh though when various British holidaymakers were overheard practicing their peculiar ‘Spanglish’ language. “Hello mate can I have a zumo?” “Can I have the bill por favor?” “Two large beers please gracias.”
Certainly we all have to start somewhere I know and just last week when in a restaurant I asked the waitress for a doggy bag for the leftovers in what I thought was my usual passable Spanish only to be asked to speak Spanish as she did not understand the language I spoke to her in.
Hmmm more Spanish practice needed methinks. 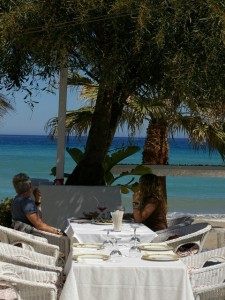 In Almeria since 2006 set up findmeahome to give a personal service suited to clients needs rather than sell what earns the most commission.
View all posts by findmeahomespain →
This entry was posted in Uncategorized. Bookmark the permalink.