Posted on November 14, 2013 by findmeahomespain

Palacio Villavicencio at the Alcazar built in 1664

As newlyweds last autumn we tried to explore Jerez de la Frontera; non-stop rain however meant that we only managed the Tio Pepe Bodega and a couple of tapas bars before soggily driving away. So a return visit was on the cards and a couple of weekends ago we drove back under a glorious blue sky.

Jerez de la Frontera is known to us Brits for three things; Sherry, its Grand Prix circuit and ‘spit’ Ryanair flights into the airport. I originally worked in the hospitality industry so for purely professional interest it was the alcohol side of things that interested me. We visited the oldest bodega in Jerez, Pedro Domecq founded in the 1700s. It’s a much more laid back and personal tour than Tio Pepe with no sense of urgency, wonderful aromas from evaporating spirits in the huge wine cellars bring a heady delight to the senses.

70,000 American oak barrels are stored 3 high in the solera system throughout the beautiful sprawling property and there are artefacts everywhere giving visitors an insight into how the various type of sherries and brandies have been produced over the centuries. At one point our guide told us how a special type of black paint is used on the barrels to ensure the humidity inside is kept constant. Then turning a corner, we spied Mr Barrel Painting man knelt on the floor in the gloom with a torch strapped to his head doing his job. Rather like the painting of the Forth Road Bridge I thought as it’s a never ending job. 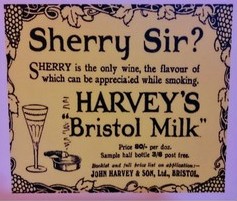 table tasting brandies and 30 year old Sherries only just as the yard arm came round. A clever marketing ploy meant that shop visits are done afterwards and again there was no rush or hard sell. Now for my Christmas tipple I have a 30 year old Pedro Ximenez sherry to look forward to. Mrs Amore was content with her drinks mats, branded glasses, souvenir posters, mouse mat and even a cuddly toy. As in The Generation Game – didn’t we (or they) do well! Afterwards as we sat at a nearby hostelry, nursing cool glasses of fino our erstwhile tour buddies walked past giving us despairing looks.

Jerez has a wonderful old quarter which is easy to navigate, its mostly pedestrianised and fairly level too. Having previously visited The Alhambra in Granada, and other Alcaza’s (palaces) in Almeria, Malaga and Seville I have to admit Jerez takes my biscuit castle wise. Simple gardens surround a beautiful mix of twelfth Century Moorish and later Christian architecture including the only surviving Mosque in Jerez, steam baths, and the olive mill with its huge workings.

Locks on the palace gates

I’ve loved the 1946 film A Matter of Life and Death ever since childhood; seeing it dozens of times. In it Doctor Reeves has a Camera Obscura in his attic; now one is installed in a tower at the Alcaza. For a couple of Euros it can be seen in action, though it’s a small room with places limited to 8 at a time. A rotating mirror on the roof projects what it sees down onto a concave screen some 2 metres across. The detail is astounding and with blue skies on the day we visited, it was a fabulous and beautiful 360 degree tour of the city.  Fittingly it was a Moslem scholar called Alhazen who first put theory into practice building the first one a thousand years ago in Cairo. Viva Jerez!