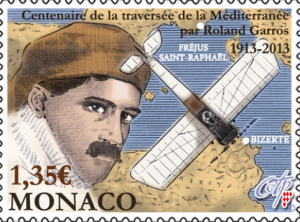 Inspiration has many sources for my weekly scribbling’s; the impending French Grand Slam tennis tournament lead my dear wife Katherine to mention she needed some facts to Twitter out as part of her job at William Hill. So quicker than a ferret up a drainpipe I delved into the short but incredible history of Roland Garros.

Born in 1888 on Reunion Island in the Indian Ocean, Roland Garros initially wanted to be a concert pianist, studying music in Paris. When he went to the Reims Air show in 1909 the flying bug bit him. He took flying lessons and earned pilot licence no.147 in 1910.

This was the beginning of powered flight; only a few years earlier in 1903 the Wright brothers had flown and steered their heavier than air Flyer for the very first time. Garros joined the Moisant International Flying Circus; he performed extensively in North America including Mexico in 1911 for President Diaz. It was a sales demonstration to show planes were perfect for reconnaissance. Mexican troops took cover and Garros successfully located them from the air.

Garros took part in the world’s first endurance races; flying from Paris/London/Paris he took second place. He also took part in a Paris-Madrid race. In Tennessee in 1912 he set an altitude record reaching 16,240 feet and smashing the previous record by over 2000 feet. The air was so thin the engine stalled yet he managed to glide safely back down to earth.

In 1913 Garros made the first successful non-stop flight across the Mediterranean; he flew 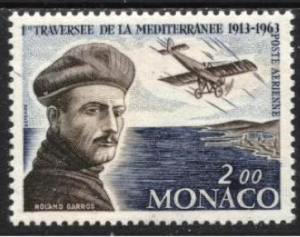 500 miles from Frejus in Provence to Bizerte in Tunisia. Ironically when WWI broke out Garros was in Germany teaching military aviation. He flew at night to Switzerland then to France where he joined a French squadron nicknamed The Storks.

At the beginning of the war planes were used for observation and opposing pilots if they met each other shook their fists at each other and glared menacingly. Later they took up bricks to drop on each other, revolvers were next. Natural escalation meant machine guns were then mounted on the sides of the flimsy aircraft. The problem was that it was impossible to fire straight ahead as the propeller would be destroyed.

Roland Garros had the idea of fitting steel deflectors on the blades to protect them from the bullets and mounted a machine gun behind. On April fool’s day 1915 he became the first person to shoot a plane down using a front mounted machine gun. Over the next fortnight he shot down four more German planes. An American Newspaper first used the term ‘Ace’ to celebrate his 5 kills.

Garros’s luck soon ran out and he was forced to crash land behind enemy lines. He was captured before he could finish destroying his plane and he was interned as a POW. The deflectors were copied and added to German planes. Fokker also examined the aircraft as he was already working on a more efficient machine gun. Fokker’s ‘interrupter gear’ synchronised the firing of the machine gun to the turning of the propeller. It was added to German fighter planes 3 months later with devastating effect.

Garros managed to escape from the POW camp on Valentine’s Day 1918. He re-joined the French Army and flew again and had more kills. Then on October 5th a month before the end of hostilities, he himself was shot down and killed by German Ace Hermann Habich. It was the day before his 30th birthday. 10 years earlier whilst studying in Paris, Roland Garros regularly played tennis at the club which, in 1920 was named in his honour!