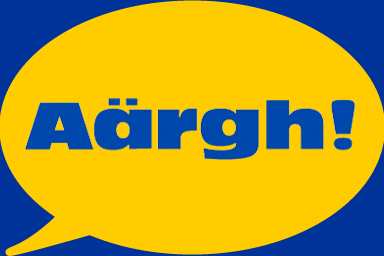 Clutching our cut out paper kitchen we returned to the big blue that’s IKEA,; they have the same layout the world over with the room designs and assembled furniture upstairs and then the Market Place below. There’s no escape as to get out, the entire store has to be traversed. It’s worse than airports where the gates are only accessible by funnelling passengers through the ludicrously overpriced ‘duty free’ shop.

Armed with the ludicrously sharp free pencils, brochures and our trusty diagram we zigzagged our way past acres of beds and sofas until reaching the relative calm of the kitchen zone. Oh joy! We opened cupboards and drawers revealing all manner of gadgets and discussed the minutiae of what door handles would look best.

We waited to be seated at a desk where yellow clothed people turn dreams into reality. I noticed that people who’d arrived after us were jumping the queue. That’s not British I thought then I saw them handing in pagers to the yellow people. No signs to tell hapless souls what to do but we deduced that we had to queue for a pager, then we queued again. Just a short hour later and we were beeped to come and sit at a high table on very uncomfortable stools with yellow girl.

Yellow girl admired our diagram as it would make her job easier. Her fingers whizzed over the keyboard and our virtual but empty kitchen was soon on the screen in front of us. The centre piece of our kitchen was to be a wall unit that held the fridge freezer alongside wall to ceiling basket shelves. As an estate agent I’d seen these wonderful things in owner’s kitchens and made no secret of my desire to one day possess one myself. After wasting 3 hours of my life on the IKEA website the other day, it was the first, last and only thing I had managed to put into our virtual kitchen. I had even opened and closed the drawers online. Disaster struck as yellow girl told us the unit was discontinued. So back to the drawing board and our jigsaw was now next to useless. We sat for an hour and a half on the painful seats and rearranged our kitchen.

Time came to print off our order list and pay. Hmm, that seems expensive we thought but at least we had pretty pictures of our kitchen to be from all angles and reasoned yellow girl knew what she was doing. But when we asked to pay, yellow girl twisted the knife and told us we couldn’t pay, as a man had to come and measure up. Yellow girl then threw us to the ground and gave us a good kicking telling us we would then have to return and repeat the whole ordering process again before we could finally pay. Full of despair we wondered why we had we asked IKEA to build the units for us? Now truly despondent we trudged off through fields of furniture to reach the stairs down to the burning fires of hell; otherwise known as the ‘Market Place!’ Mr IKEA surely had Dante’s nine circles of hell in mind when he designed this hell pit.

Dante has a sign on his gates of hell that reads ‘Abandon hope all ye that enter here,’ so should IKEA. At the bottom in the gloom, entire families gormlessly shuffle past stacks of stuff. Everywhere people are clutching hot dogs and ice creams with no intention of buying anything else. Huge trolleys try to break feet and ankles; people clutch blue bags with sharp things pointing out of them dangerously at eye level.  Crying children and lost grannies add to the maelstrom. Every so often the sound of breaking glass is heard.

There’s no escape; all 9 circles of hell must be passed to reach salvation otherwise known as the EXIT. First up limbo, people randomly stop in the middle of the aisles and cause pile ups. Second lust, shiny things piled temptingly everywhere. Third is gluttony, just one more hotdog, oh and some chips and an ice cream. Fourth is greed, as none of this stuff is needed but still people buy it! Fifth is anger as I now hate humanity and IKEA in equal measure. Sixth is heresy as I question the existence of God. Seventh is violence, I want to run everyone through with an IKEA curtain rail. Eighth is fraud, shoplifters are lucky as they get arrested and escape in police cars. Lastly is treachery, I seriously consider making a break for it leaving my wife Katherine admiring the garden furniture!

In Almeria since 2006 set up findmeahome to give a personal service suited to clients needs rather than sell what earns the most commission.
View all posts by findmeahomespain →
This entry was posted in Personal, Spain, Thoughts, Uncategorized and tagged design, DIY, IKEA, Kitchen, Malaga, market place, property, shopping. Bookmark the permalink.